I will bless the Lord at all times: his praise shall continually be in my mouth 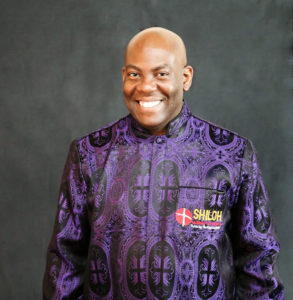 Processed with VSCO with a6 preset

Pastor Myron is the fifth (youngest) child of the late Rev. William and Annie L. Leach.  He made his profession of faith and was baptized as a young child under the pastorate of his father at the Oak Grove Missionary Baptist Church in Charles County, MD. Often times, he would minister in song before his father preached. Pastor Myron also assisted his mother at an early age by playing the piano and serving in music ministry at Oak Grove as well as various ministries in the Washington Metropolitan Area.

After the passing of his beloved father, Pastor Myron joined Shiloh Abundant Life Center (SALC) under the pastorate of his brother, Bishop Darnell Leach, in 1990. Since his high school years, he served as chief musician at SALC. In 2002, he was appointed the covering elder for the Music and Arts Ministry. Pastor Myron also served as a Lifeline Leader along with his wife, Pastor Cynthia, for married couples. He is a teacher with Shiloh’s School of Ministry/Bible Study and serves on the Presbyter and Trustee Boards.

Pastor Myron is a licensed realtor in the State of Maryland and District of Columbia. He specializes in assisting and educating first-time home buyers. He is an avid Washington Redskin fan and loves all types of sports. For fun he loves watching WWE and keeping up with pop culture which spurs great conversation with young people. He is an automobile enthusiast; he loves nice cars! Pastor Myron loves to laugh!!! He is a very sharp dresser; GQ personified. He is a family man; both daughters are daddy-girls who deeply adore their father.

As he sought the Lord for direction regarding ministry, Pastor Myron accepted the call to preach the gospel in 1991.  After meeting the licensing criteria in 1998, he was licensed as a minister of the Gospel of Jesus Christ. He was ordained an Elder in the Lord’s Church in 2002; appointed an associate pastor in 2013; appointed Lead Pastor in 2014; and installed as Pastor of Shiloh Abundant Life Center – North in 2016.

Pastor Myron loves the Lord and his character personifies godly integrity and wholesomeness. He is a young man with an old soul who sincerely loves the sheep. Pastor Myron is a listener who offers biblical, sound wisdom. He extends love and genuine care towards the members of SALC. Praying and seeking God’s face on behalf of others is his lot in life. Pastor Myron believes in equipping leaders and mentoring believers to disciple others for Jesus Christ.

Also I heard the voice of the Lord, saying, whom shall I send, and who will go for us? Then said I, here am I; send me. 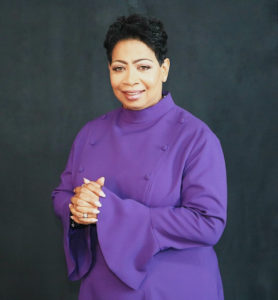 Processed with VSCO with a6 preset

Co-Pastor Cynthia Venable Leach is a native Washingtonian and is the second child of Deacon Clinton and the late Deaconess Sadie M. Venable. She was brought up in the admonition of the Lord and loved attending church services. She attended Prince George’s Community College, Jericho Bible School, Shiloh Abundant Life School of Ministry and the University of Maryland University College.

Pastor Cynthia, who is affectionately called Pastor C, accepted the Lord Jesus as her Savior and was baptized in 1972 at the Park Road Community Church under the pastorate of Rev. Eugene W. Burton. During her membership at Park Road, Pastor C sang on many choirs, served on the junior usher board, participated with youth ministry events and attended Sunday School faithfully.

In 1986 she joined Shiloh Abundant Life Center under the pastorate of Bishop Darnell and Dr. Anita Leach. Soon thereafter, she became the Coordinator of the Hospitality Ministry and approximately a year later she was appointed Children’s Church Coordinator. In 1989, Pastor C was selected by her pastor to lead praise & worship. She also began to assist her dear friend, Pastor Myron K. Leach, with music ministry by directing the choir.

Pastor C finally stopped running away from the call to preach God’s Word in 1992. The Bible says, “Whom shall I send, and who will go for us? Then said I, Here am I; send me (Isaiah 6:8). Pastor C’s response was “send me, I’ll go in Jesus’ Name!” In 1998 she was licensed an evangelist; 2004 ordained an elder; 2013 appointed an associate pastor; and 2016 appointed co-pastor of Shiloh Abundant Life Center – North.

Pastor C loves God’s Word and His people. She is a fourth-generation preacher of the Gospel of Jesus Christ. She is an anointed woman of God who provides instructional workshops/seminars on many topics for Women, Youth, Music Ministry and Leadership. Pastor C is a sincere, caring people-person who loves seeing lives transformed by living according to the Word of God.

Pastor C served in several leadership roles as well as teams/committees at Shiloh Abundant Life Center. Currently, Pastor C is a member of Shiloh’s Presbyter Board. She serves as the Women’s Ministry and School of Ministry/Bible Study Coordinator. She is a Bible Teacher, Pastoral Care Team Member and Mentor to many. She will serve in any capacity needed; as long as it glorifies God!